It’s clear, Canada is thriving. The economy is booming. The countryside is arguably the most beautiful in the world. It’s also the biggest. You can not only have that garden you always dreamed of, but there’s enough for every single member of the population to have 61 acres of their very own. The people are friendly and welcoming to new arrivals. If you’re feeling the draw to emigrate to another country, or have been weighing up your options post the referendum, a move to Canada is an exciting and very realistic possibility.

Over the last decade, Canada has offered residency to more than 200,000 immigrants each and every year…and this doesn’t seem to be slowing down. Recently, the Federal Government announced plans to welcome another million over the next few years. If you have an innovative business idea or possess skills that their very buoyant job market are crying out for, you’ll be especially welcome. Perhaps you need a little more convincing, so today we’re listing 10 reasons why you should move to Canada in 2019.

Toronto was named the fourth most attractive city in the world – so it’s not just the Canadian countryside that will be a feast for your eyes.

Canada is the second largest country in the world, yet only has a population (36 million) of just over half that of the UK. You know what that means…glorious space! Canada boasts a whopping 10 million square kilometres of countryside, ranging from snowy mountains to crystal clear lakes and arctic tundra to thick forests. If you and your family are looking for an excuse to get outside more, a move to Canada is a great idea. There’s no way you’ll be able to resist lacing up those walking boots and heading out to discover the natural delights just outside your front door. In addition to its natural beauty, Canada is also an incredible liveable spot. In fact, this year three of Canada’s cities, Vancouver, Toronto and Calgary, were listed in the Top Ten of The Global Liveability Index 2018 – a list compiled by The Economist Intelligence Unit. Toronto was also named the fourth most attractive city in the world – so it’s not just the Canadian countryside that will be a feast for your eyes.

You heard it here first – a move to Canada will make you happier! Fact. The World Happiness Report,  an annual survey released by the United Nations, ranked 156 countries by their happiness levels and a further 117 countries by the happiness of their immigrants. GDP, life expectancy, social support, freedom, generosity and corruption are all factored in and this year, Canada was named as the seventh happiest country in the world. The highest ranked (and happiest) nation located outside of Europe! 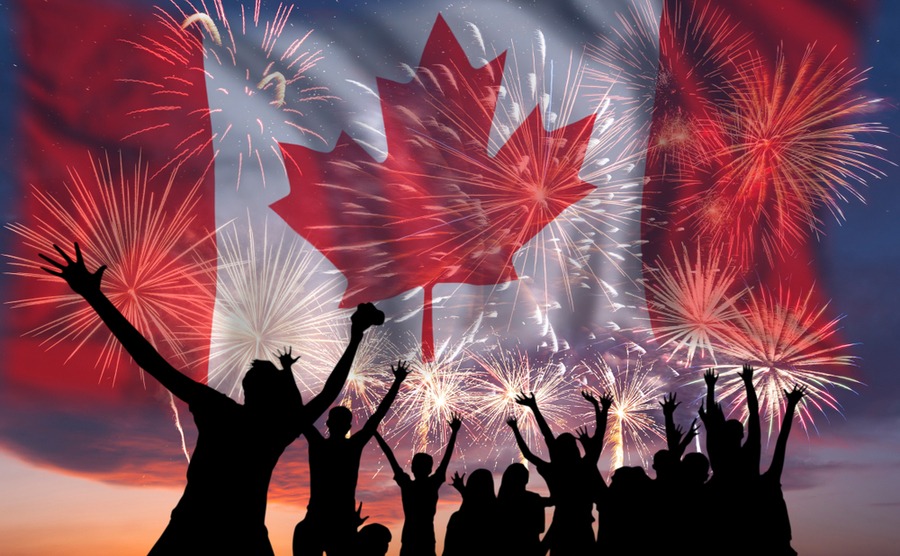 Will you be celebrating a move to Canada in 2019?

If you’ve ever had the pleasure of meeting a Canadian, you’ll know that they are a friendly, fun and welcoming bunch. While one of your main concerns about making a move to Canada might be fear of missing the British sense of humour, Canadians are a funny bunch too. Some of the biggest names in comedy hail from its shores, including Jim Carrey, Mike Myers, John Candy and Dan Ackroyd. You can rest assured that Canadians have a great sense of humour…unless you mock their favourite hockey team of course!

Furthermore, around 20% of Canada’s population are foreign-born. This makes Canada one of the most multi-cultural nations in the world. Close to half of Toronto’s population are immigrants. The 2015 Legatum Global Prosperity Index found that 96% of Canadians believe that their country is a ‘good place for immigrants’. Canada is also welcoming and accepting of the LGBTQ community. Gay marriage was made legal way back in 2005. Therefore, Canada was the fourth country in the world, and the first country outside of Europe, to legalise gay marriage.

4 – Good for your health

Canada quite rightly prioritises the health of its citizens. It spends an average of around 10 percent of its GDP on its healthcare system each year. Around 70 percent of all healthcare is funded by the government and free basic care is available to all Canadian citizens and permanent residents. This makes Canada’s healthcare system one of the most fair and most accessible in the world. The treatment, staff and facilities available in Canada are world-class. Waiting times can be a little lengthy, but if you opt to take out a private insurance policy to take care of treatment not covered by the government, you’ll get an appointment at the drop of a hat. Out of all the countries in the world, Numbeo ranked Canada 25th in terms of healthcare in their mid-2018 survey.

In Canada, primary and secondary education are free of charge and available to everyone, plus according to the Times Higher Education’s World University Rankings 2019, Canada is home to 27 universities internationally-considered to be some of the best in the world. Furthermore, Canada ranks 13th in the 2018 World Best Education Systems, compiled by World Top20.org. This study considers enrolment rates, academic levels, graduation rates and adult literacy. The country is also an incredibly welcoming spot for international students and Canadian universities pride themselves in instilling a global outlook in all of their students, whether hailing from Canada or further afield. Also, a student survey conducted by the Canadian Bureau for International Education found that 90% of all students were either ‘satisfied’ or ‘very satisfied’ with their studies in Canada. Just think – a move to Canada could mean never having to hear your kids complain about school ever again!

When searching for the best place to raise your brood, Canada is a highly attractive option. With all the natural wonders of the country, your children will have plenty of opportunity to get out into the fresh air and be physically active. In addition to excellent education, Canada offers longer maternity and paternity leave for parents than most countries. Furthermore, the US News and World Report’s annual Best Countries rankings, found that Canada is the 5th best country in the world to bring up a happy, healthy family.

If you’re moving to Canada, make sure you’re up on your finances with a free, no-obligation quote from Smart Currency Exchange.

The life expectancy in Canada is currently 80 for males and 84 for females, but these figures are increasing steadily year-on-year. Those of us looking for a new location are all on the hunt for a dream spot where we won’t just survive, but will instead thrive and enjoy the chance to live our best lives. We’ve only got one shot after all! When it comes to the most prosperous destinations, it’s another Top Ten ranking for Canada…this time securing 8th place in The Legatum Institute’s 11th Annual Global Prosperity Index. The survey compares more than 100 variables to determine the most prosperous countries on the planet, including mental and physical health, personal freedom, natural environment and economic quality. 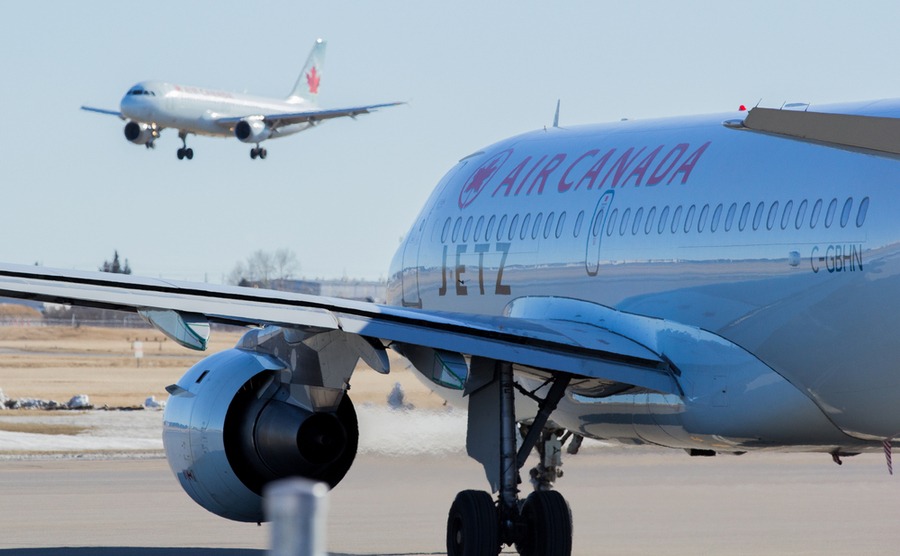 You still have time to board a flight to Canada this year! (Alex JW Robinson / Shutterstock.com)

Canada’s economy is performing very well, mostly as a result of how seriously rich the country is in natural resources. The centre of Canada is home to abundant farmland, which means its export business is going from strength-to-strength. In Alberta there are well-paid jobs aplenty in oil and gas, gold, copper and iron ore. If you are a skilled worker, you can take a look at what types of job opportunities (and salaries) are available here. The country also boasts a thriving tourism industry. More than nine millions tourists arrive annually ready and willing to splash the cash enjoying sights like Niagara Falls, the Northern Lights and Banff National Park. This is an excellent place to conduct business. In fact, the US News and World Report’s Best Countries Rankings listed Canada in the top ten best locations for entrepreneurs, being business-friendly, starting a business, headquartering a corporation and for transparency. If you’re hoping to start a business when you move to Canada, these rankings provide an incredibly hopeful glimpse into what your future in the country will hold.

Lifestyle plays a huge part in all expat decisions to up-sticks and relocate to the other side of the world. Unsurprisingly Canada doesn’t fall short on lifestyle advantages. Canada is an active nation. The landscape provides the perfect natural playground for recreational activities like skiing and snowboarding, hiking, climbing, sailing…this list goes on and on. Canadian cuisine is healthy and delicious – especially when it’s homegrown, which must of the country’s produce is. Additionally, the cost of living in Canada is mostly cheaper than the UK. Rent is lower, as are restaurant prices. Also, when the Bloomberg Global Health Index examined lifestyle variables including causes of death, life expectancy, social networks, family, sense of purpose, healthy eating and stress levels in 163 nations, Canada slid comfortably into 17th place.

A move to Canada means prioritising the safety of you and your family. Back in 2014, the OECD Better Life Index gave Canada a 9.7 out of 10 rating for safety and security. Violent crime is extremely rare, and gun ownership is four times less than their neighbours south of the border – mostly due to the strict laws applied to gun ownership. In addition, 81% of Canadians say that they feel safe walking at night and the homicide rate is 1.4% less than the OECD average of 3.6.