These high-end neighbourhoods and their jaw-dropping homes provide a glimpse into luxury living in Australia.

With one of the most expensive property markets in the world, there are plenty of areas in Australia that offer some of the most luxurious living in the world. Think million-dollar views, grand estates and mega wealthy neighbours. Sydney boasts some of the most prestigious suburbs in the country where median home prices tip the £7.7 million mark. If you’re looking for a slice of luxury in Australia, here are some great neighbourhoods to begin your search.

Point Piper is considered the most expensive suburb in Australia.

Point Piper is considered the most expensive suburb in Australia, and in 2011 was ranked the 11th most expensive street in the world according to Business Insider. The one kilometre strip of waterfront residences is home to some of the country’s financial elite. The median home price in Point Piper is £7.7 million

Darling Point, another Sydney suburb, is one of the most salubrious in the country, with a median home price of £4.2 million and a record sale in 2015 of a unique 6,200 square metre estate that went for £10 million. Darling Point is just down the road from Point Piper, and only a couple of kilometres from Sydney’s Central Business District (CBD). 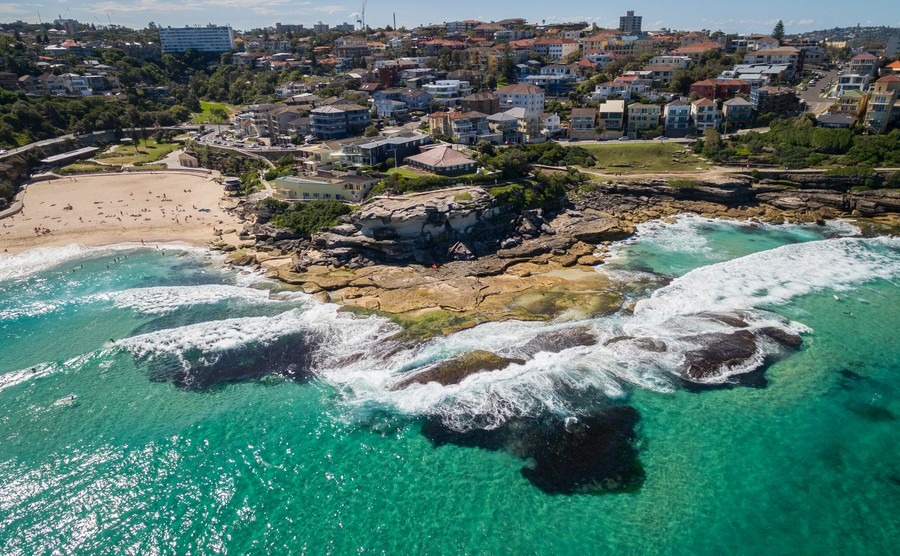 Woolwich in the west of Sydney is also considered one of the richest neighbourhoods in the country. The median home price in around here is £2.4 million, but properties seldom get the chance to come on the market in this highly sought-after area.

The most expensive beach community in Australia is Sydney’s Tamarama. Right near the famous Bondi Beach, Tamarama has a median home price of £2.1 million. Tamarama certainly has a sense of prestige, with home prices 73% higher than neighbouring Bondi.

If you’re ready to live the highlife in Australia, download our Emigration Guide today!

Toorak, an inner suburb of Melbourne, has the most expensive real estate in the state of Victoria. The median home price is £2 million, and most of the wealth in the neighbourhood originates from old money. With wide leafy streets, large gated estates and just a short distance from the sights and sounds of downtown Melbourne, Toorak is the place to be for the rich and famous in Melbourne.

Property prices in Byron Bay may not run into the multi-millions but this desirable seaside community has so much appeal locally and internationally that it had to make the list. A community of only 9,000 lives on some of the most stunning stretches of beach in Australia, meaning the demand for the limited supply of Byron Bay property is strong. The exclusivity of Byron Bay and the median home price of £1 million make it one of the most luxurious places to live in the country.

The most expensive suburb in the city of Brisbane is New Farm. Characterized by its wonderful mix of people, places and amenities, New Farm is rated as one of the most liveable suburbs in the country. The median home price in New Farm is £1.1 million, attracting young millionaires and the nouveau riche.

Characterized by its wonderful mix of people, places and amenities, New Farm is rated as one of the most liveable suburbs in Australia.

In Perth the most expensive suburb would have to be Peppermint Grove. This swanky community boasts a median property price of £2.2 million, and the neighbourhood is often referred as Australia’s Monaco, due to its dense population of wealth. The suburb is named after the local peppermint trees and is located on the banks of the Swan River.

Whatever state you choose to reside, Australia offers its fair share of ritzy neighbourhoods and luxurious homes to choose from.