Are you thinking of beaches, year-round sun and unlimited entertainment? The Gold Coast, located in Southern Queensland, ticks all these boxes and is everything you have dreamed Australia would be. Only an hour outside of Brisbane and with its own international airport, this tourist hub boasts some of the greatest beaches in the country, the nation’s best theme parks and some of the biggest sporting events around.

What makes the Gold Coast great?

The Gold Coast is famous for having some of the best weather in Australia. Summers average a warm 25°C while winters hover around the 18° mark. The beaches on the Gold Coast stretch as far as the eye can see, and the sand – a soft white silica – feels powdery under foot. With a reasonable cost of living, a diverse job market and close to Queensland’s capital, Brisbane, the Gold Coast is ideally positioned as a place to live and work.

The Gold Coast features a year-round events calendar with big international sporting occasions like the State of Origin in rugby league, numerous theme parks like Dream World, Sea World and Movie World, limitless shopping, countless concerts and much more. The Gold Coast is Australia’s playground for entertainment, with people from all over Australia and the world holidaying and playing there. 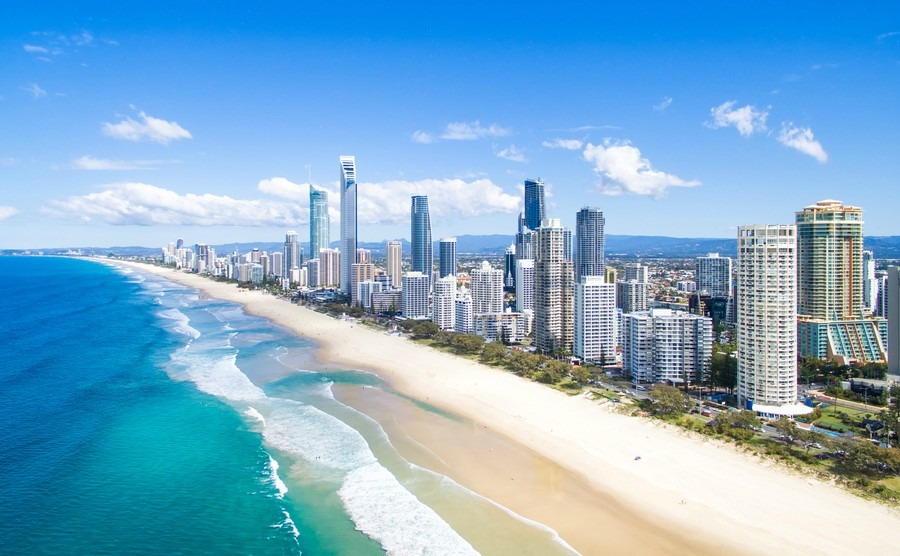 Live the highlife on the Gold Coast.

Living on the Gold Coast

The Gold Coast offers many areas to live, and with a population of half a million people it is just the right size. Surfers Paradise (yes, it’s really called that) is the heart of all the action, where skyscrapers fringe the surf beaches, contrasting glitz and glam with a laid-back surf culture.

There are plenty of jobs on the Gold Coast for people in the service, tourism and construction industries

Other beach suburbs on the Gold Coast include Coolangatta, Broadbeach, Mermaid Beach and Southport. Southern lying suburbs include Robina and Currumbin, while northern suburbs (closer to Brisbane) include Helensvale, Coomera and Ormeau. The average cost of a two-bedroom flat in Surfer’s Paradise is around $400,000 (£247,000), while a three-bedroom home in the outer lying suburbs such as Coomera would cost about $355,000 (£220,000).

Working on the Gold Coast

There are plenty of jobs on the Gold Coast for people in the service, tourism and construction industries. With an easy commute to Brisbane by car, and a commuter train and light rail expected sometime in the future, working in the city is a breeze. Retirees will also love the Gold Coast, with plenty of golf courses, shopping centres, parks and beaches to relax and unwind. There are two universities – Bond and Griffith – and plenty of private and public-school to choose from.

The Gold Coast is a refreshing option for those looking to move to Australia, combining capital city convenience with a relaxed tourist resort vibe.